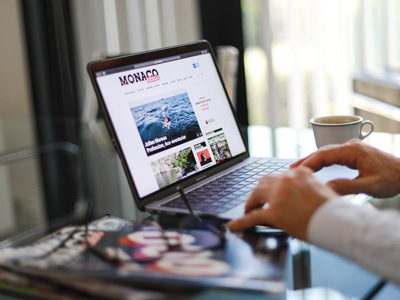 Created in September 1995, Monaco Hebdo is a weekly newspaper that provides general information about the Principality. Every week, professional journalists deliver to readers comprehensive and detailed information of all political, economic, judiciary, social, cultural, sport news of Monaco.
Monégasques, residents, political and administrative staff, members of the public service are devoted readers of Monaco Hebdo.

News and investigations
Every week, the newspaper proposes a substantive file, supported by the evidences, gathered in the field and based on statistics. A real value added analysis of major events of the Principality. Monaco Hebdo is delivered every Thursday to newsstands and has the best frequency to cover substantive issues with necessary depth of perspective.

Wide distribution
A wide distribution to Monaco and to the neighbouring areas : Beausoleil, Cap d’ail, Roquebrune-Cap-Martin and Nice, it is the most important broadcast (outside the surroundings). Monaco Hebdo counts 600 subscribers. Embassies, tourism offices, Monéqasques living abroad are also among them. Every week, several hundred copies are available for free to costumers of Monaco Heliport, of Monte Carlo Country Club as well as Principality’s hotels, such as : Hôtel de Paris, Hermitage, Café de Paris, Hôtel Métropole, Novotel, Mariott hotel.

High visibility
Monaco Hebdo has a great visibility within the Principality. Primarily, through regular reporting at the point of sale with flyers and displays stands of the newspaper, but also by means of local radio spots.

Analyses and debates
Politics, economy, sport, society, leisure, culture, judiciary, testing… Every month, all the news of the Principality is under scrutiny of the L’Obs’s team. With researches, interviews and reportages. But the real strength of L’Obs is its briefs. An opportunity to delve into the hot topics that shake Monaco, due to surveys, analyses and open debates. While also providing a forum for experts. This allows readers to understand better the issues of hot topics.

Optimized delivery
With 11 editions per year and the set release date at the beginning of every month, L’Observateur de Monaco is broadly disseminated to the public and institutions. Every month, several hundred copies of L’Obs are distributed to clients of Monaco heliport. Thus, providing an additional diffusion. Moreover, the news magazine receives effective visibility by means of flyers installed at newspaper sellers of the Principality.