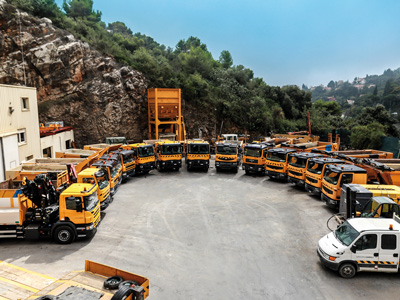 The State also entrusted to the CAROLI Group a construction of numerous elements of public infrastructure in the service of Monégasque population, among which : the Princess Stephanie Youth Centre, the Fontvieille school, as well as underpinning works and excavation for the Princess Grace Hospital Centre.
The construction of the new Technical and Hotel School in Condamine with 6 car park levels (released in 2011) was also entrusted to the group, as well as realization of the new seat of the National Assembly in Monaco Ville. There are other wide-ranging projects of the Caroli Bat : the construction of the Clinical Gerontology Centre at the Princess Grace Hospital Centre, the municipal nursery La Cachette at the boulevard de Belgique, opened in 2009.
Such number of projects given to the company, demonstrates the full confidence of the government.
Recently, the Public Works Department proposed to the Caroli Bat of the CAROLI Group to be a part of building process of Monaco Yacht Club designed by the architect Norman Foster.
The State of Monaco also entrusted the Caroli Bat, as a General Contractor, a realization of a real estate operation Villa Engelin that has 135 accommodations owned by the State, 1500 m2 of office space and 9 car park levels. This project was delivered in December 2017. At the same time, the Caroli Bat realized earthworks and underpinning of the FANB School in Roqueville neighbourhood.

The Alberti company, created in 1984, rejoined the Caroli Group in July 2010, and changed its name in the beginning of 2018 to the Caroli TP. It represents one of the key economic players in the field of earthworks and underpinning of high technicity.
Over the years, the company demonstrates its skills and professionalism while working on such prestigious projects as Grimaldi Forum, the car park of Boulingrins, the commercial complex Métropol, the seat of the National Assembly.

CAROLI TP IS COMPOSED OF :